Posted on March 6, 2019 by earthstonestation

“Never doubt that a small group of thoughtful, committed citizens can change the world; indeed it’s the only thing that ever has.”     Margret Mead

The Everglades are the largest wilderness of any kind east of the Mississippi. Everglades National Park was carved from this wilderness for preservation of the biodiversity found there. It is the first time in American history that a large tract of wilderness was permanently protected, not for scenic value, but for the benefit of the unique diversity of life it sustained. The greater Everglades ecosystem supports a multitude of plant and animal species not found elsewhere on the planet.

Everglades National Park is the only national wetlands park. It is the most significant breeding ground for wading birds in the United States. The juncture at the ecotone of temperate and subtropical America, the fresh and brackish waters, shallow bays and deeper coastal waters creates a complex of habitats supporting a high density of flora and fauna. In 1979 Everglades National Park was given designation as a World Heritage Site “and joins a select list of protected areas around the world whose outstanding natural and cultural resources form the common inheritance of all mankind.” The Everglades have been recognized as an icon to the international  community, bearing status as a United States National Park, UNESCO Biosphere Reserve, and RAMSAR Convention Wetlands of International Importance.

There are nine distinct habitats within the Everglades. 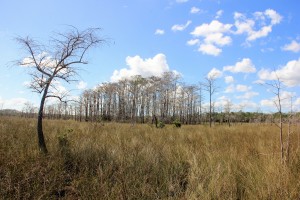 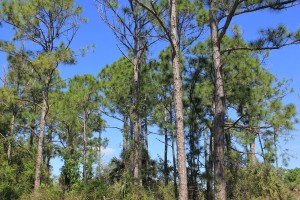 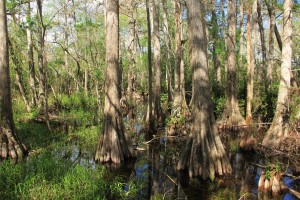 In 1925 at the age  of 60, Ernest Coe a landscape designer from Connecticut moved to Miami, Florida. He soon became acquainted and associated with a small group of other naturalists. Traveling in the same intellectual and social circles, discussions and concerns were voiced about the degradation of the Everglades in the name of progress and prosperity. South Florida was experiencing an unprecedented surge in population, real estate development and land speculation. Wetlands were being drained for residential and business zones, wading birds were slaughtered by the millions for their colorful feathers, rare orchids were being plucked from the habitat, hunting of animals was unchecked.

After his first trip deep into the Everglades, Ernest Coe was so enamoured that he would spend the next 20 years fighting for the protection of this unique environment. Coe spent countless days with only his walking stick exploring the backcountry, often spending the night on the bare ground or a pile of leaves. In 1928 Coe was a founding member of newly formed Florida Society of Natural History. A letter was then written to the first Director of the National Park Service outlining a proposal for a national park dedicated to the preservation of the Everglades. That same year an exploratory trip was organized including participants Ernest Coe, the National Parks Service Director, President of the Audubon Society, the Yellowstone Park Superintendent, a botanist, a member of the House of Representatives, and journalist Marjory Stoneman Douglas. Ernest Coe talked, petitioned and pleaded his case about the importance and value of protecting the Everglades the remainder of his life.

Marjory Stoneman Douglas is one of the most important voices to emerge from the dawning of environmental consciousness in 20th century America. After the 1928 exploratory trip into the Everglades, Marjory Stoneman Douglas became an ardent supporter of Ernest Coe and his vision to create Everglades National Park. She used her writing skills and dogged determined to persuade others of the importance of this ecosystem. Everglades National Park was established in 1934.

” To be a Friend of the Everglades is not necessary to spend time wandering around out there.”      Marjory Stoneman Douglas

The park was dedicated in 1947, the same year that Marjory published her seminal work The Everglades: River of Grass. The book innervated public interest in protecting the Everglades against development and made a lasting impact on the future of Florida’s conservation and land use policies. By 1980, tireless advocacy earned her everlasting admiration and respect of conservationists around the world. She will always be remembered as the woman that saved the Everglades.

Two people that saved the Everglades deserve our unending admiration; Marjory Stoneman Douglas a short slim woman with a powerful voice and Ernest Coe, a landscape designer that loved the wild places. Their selfless service has been a benefit to conservancy the world over.