Posted on December 8, 2018 by earthstonestation

Real estate agents will tell you that location is everything. From a business standpoint that makes perfect sense.  A successful business location should have good visibility, favorable traffic patterns and a density of population. Urban home values are also subject to location. Neighborhoods, schools, proximity to commercial areas and businesses all factor in for a desirable location. For myself location is also important although my criteria is much different than those above. I prefer to live in a rural area where population density is low. Rural communities usually have low crime rates. Generally speaking it’s a safer place to live. Mora County where I live has a population density of nine persons per square mile. Suits me fine.

Climate and weather are other factors I consider for a preferred location. Soil, water and access to natural resources such as stones for foundations and walls or a woodlot for timbers, building material and firewood are other important things to examine.

I believe the Lower Farm is in a good location. There is magic and mystery here. I’ll never be sure if I chose to live on this land or the land chose me. None the less here I am. The Lower Farm, Ledoux, New Mexico.

We all seek a place of refuge. A place to escape the noise and overwhelming distractions of the modern world. There are such places. When I open my front door and step onto the front porch all that my eye can survey is at peace.

In the spreading valley beyond scattered cattle wander the fields. A few horses gently graze. A red tail hawk glides the currents. A half mile away smoke lazily drifts from a neighbors chimney. As I raise my eyes to the mountain peaks in the west I am overcome in awe and am humbled.

All is at peace. I take a deep breath and focus on the moment.

Between the Great Plains to the east and the Sangre de Christo mountains to the west are hundreds of canyons and mountain valleys. The Sangre de Christo range is at the tail end of the Rocky Mountains, which start in Canada and terminate near Santa Fe, New Mexico. Truchas Peak in the nearby Pecos Wilderness rises to an elevation of 14,001 at it’s prominence. It is the second highest peak in New Mexico. 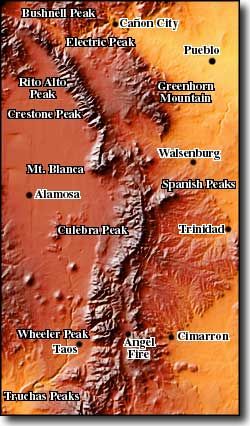 At the bottom of the map seen at right the Truchas Peaks are noted. The Lower Farm, Morphy Canyon, Ledoux, New Mexico lies due east on the flank of this mountain range.

” No matter how sophisticated you may be, A large granite mountain cannot be denied – it speaks in silence to the very core of your being.”  Ansel Adams

Morphy Lake is a small state park only two miles from my house. Besides providing outdoor activities for the citizenry the lake has another important benefit for the area. Water from the lake is used for irrigation through several ancient acequias. Certain land owners along the ditch have water rights to irrigate their fields. I am fortunate to be one of them.

Another water amenity is a small creek (Rito Morphy) that runs across the bottom of my property. In the photo one can see a line of trees that trace the Rito Morphy as it flows to the horizon.

The Lower Farm is situated at 7,600 ft. above sea level near the bottom of Morphy Canyon. An ideal location. There are expansive views, clean unpolluted air, clear waters, ease of access to the national forest and an abundance of wildlife. We have 283 days of sunshine a year (the U.S avg. is 205). Our summer high temperature in July is 80 degrees and the January winter low is a chilly 16. Moderate overall. On average there is 96″ of snowfall and 21″ of rain per year. Again moderate.

New Mexico is at the forefront of places experiencing climate change. Higher than normal temperatures and severe drought have plagued the state for a decade of years. I’m hoping that my elevation and proximity to the mountain range will alleviate some of the more extreme effects of future climate change. The water flow from upstream rain and mountain snowpack might be meager but the watershed itself will still exist. The watershed with beaverdams and riparian habitat that passes through my property.

All is at peace. Take a deep breath and focus on the moment.

The first settlers to the area arrived in the early 1800s. The Mexican government established a land grant to permit a few families to begin a village. There were still Indian raids at the time. Primitive as life was the people persisted. Supply trains (wagons) were infrequent or non existent. It was a subsistence economy. People raised goats, sheep and chickens, others grew beans and corn. Trade was done on a system of barter. When the American government annexed all of New Mexico after the Mexican War a cash economy was established. Lives and homesteads were seriously affected by the negative consequences. Culture and tradition do not so easily fade away however, even when confronted with upheaval in politics or the economy.

In the surrounding area of communities many of the early traditions still exist, sustained by behaviors passed on over generations, of language, food and faith. Above all is a sense of place. A communion with the land.

A Communion with the land

The Lower Farm gives me a sense of place. I know where I am on the planet. I can experience the grandeur of nature from my front porch. A place to be at one with the Earth.

The old adobe house serves me well. The structure is sound and after 150 years it has proven it is sustainable. Sustainability requires maintenance though and at this point more than maintenance, a full renovation is in order. New windows, doors and floors all need to be replaced. Indoor plumbing (with hot water) would improve life immensely as would an upgrade to the dubious electrical system.

The past couple years there have been a number of improvements made. Lots more to go. I have a vision and frame that vision with historic preservation. I have become the curator of legends and myths.

After reading this post you will have become more familiar with My Location, where I write. Thanks for stopping by.

promoting environmental education, protecting all species and preserving the wild places with art, music and storytelling.
View all posts by earthstonestation →
This entry was posted in Uncategorized. Bookmark the permalink.