The eerie aura of Mo’okini

On the northernmost tip of Hawai’i Island sits a massive stone ruins. The winds across Upolu Point rustle the grass of the hillside. The stones of the solitary ruins are silent. Once it was a place of human sacrifice.

The legend of Pa’ao ( Pāʻao ) says that in the 12th Century, a priest came to the Big Island. He is the founder of the high-priest family of Hawaii. Paʻao’s descendants became priests, and their line or order, called Holaʻe, continued into historical times.

Pa’ao was a priest, brother to Lonopele of Upolu, Samoa. The two brothers were engaged in an argument over stolen fruit. As the argument grew to war the sons of both brothers

were murdered. Pa’ao and supporters were forced to quickly leave Upolu on their double hulled sailing canoes.

Pa’ao traveled across the vast Pacific with his warriors and families, his wife, and an astrologer to help them navigate the waters. Pa’ao sailed by the stars through the deep ocean and when nearly out of provisions, the party finally reached the Big Island of Hawaii.

They landed in Puna, where Paʻao built the stone temple platform, or heiau, of Aha-ula, or Red Mouth. This was the first luakini heiau in Hawaii, the first heiau where human sacrifices were offered. Several years later on the opposite side of the island in Kohala, Pa’ao rebuilt the ancient heiau of Mo’okini. That area now bears the name of his native home- Opolu.

The Mo‘okini Heiau is said to be the first heiau (temple) to ever have been built on the Hawaiian Islands.  The heiau was initially built around A.D. 480 by a high priest named Mo‘okini, who served under the high chief Mo‘ikeha (ruling chief of Kaua‘i Island).

Centuries later, around A.D. 1370, the high priest Paʻao raised the heiau walls higher and rebuilt the altar as his hoʻokupu (offering) to the gods. He initiated human sacrifice and enforced stricter moral codes of conduct, to stem dilution of the royal bloodlines. Paʻao believed that the chiefs of Hawaiʻi had become hewa, or degraded, by indiscriminate intermarriage with lesser chiefs and commoners. 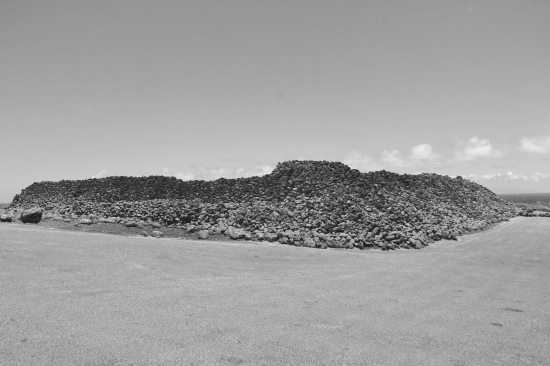 Mo’okini Heiau was built  in the shape of a parallelogram – 267 feet long on the west, 250 feet on the east, 135 feet on the north, and 112 feet on the south. Stone walls made without any mortar using a dry stacking technique enclose the heiau. The walls are 10 feet wide at the base and are tapered both inside and out, varying in height from 7 to 14 feet. 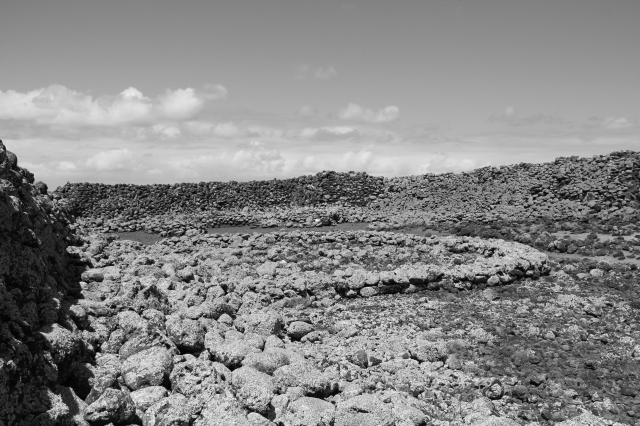 On the inside, the heiau contains a large stone platform in the northern end, with smaller platforms that once held thatched temple buildings scattered throughout the site.

The heiau was reserved only for the ali’i nui (high chiefs). 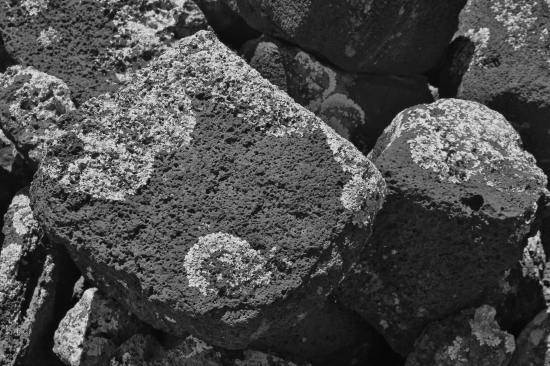 According to legend, the heiau was built from ‘sunrise to first light’ by up to 18,000 ‘little people’ under the supervision of Kuamoʻo Moʻokini, 1500 years ago.

The Menehunes were supposed to have been a wonderful people, small of stature and of great activity. They were always united in doing any service required of them. The little people get credit for building a number of heiau.

Mythical Menehune were a very clever and industrious tribe. They had the reputation as master builders, but for reasons unknown they only worked at night under the light of the moon. It was their rule that any work undertaken must be completed in one night, otherwise it would be left unfinished, as they did not labor twice on the same work.

Thus in one night the heiau of Mo’okini was built.

There is an old Hawaiian saying “He po hookahi a ao ua pau” – – in one night, and by dawn it is finished. 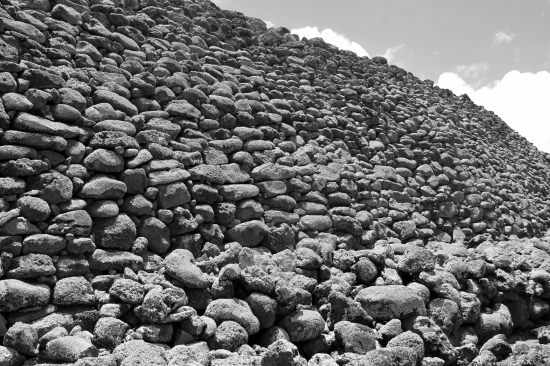 The Mo’okini heiau is built of basaltic rocks using the dry-stacking method. It took exact planning and well organized teamwork since no concrete or binding is used to hold the rocks in place. A favorite engineering method was to pass rocks by hand along a double row of men in long lines from the site of the quarry.

For some reason it was decided stones from the local vicinity were not suitable for the work. Oral tradition says that tens of thousands of men passed stones hand to hand from the Pololu Valley, nearly 12 miles away. If a stone was dropped, it was left where it lay. The evidence of this is a trail of water-worn basalt rocks that lead from the Pololu Valley to the heiau. 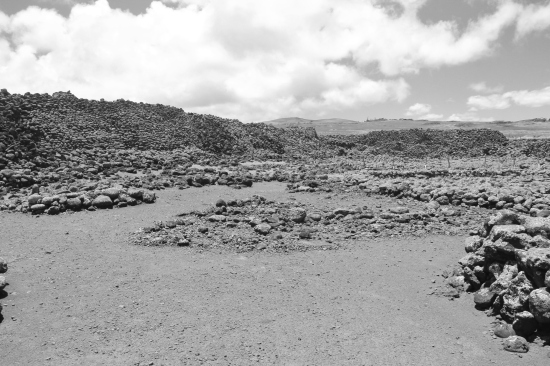 Heiau were places of worship that were the centerpieces of Hawaiian religious beliefs. From each heiau, the kahuna (priest) communicated with the gods and advised the ali’i (chiefs). Heiau once existed throughout the Hawaiian Islands, but their use ceased with the abolishment of the kapu (taboo) system by Kamehameha II in 1819.

Ancient Hawaiians had many types of heiau, each with their own distinct function and use by particular segments of society. Heiau ranged in size from single upright stones to massive and complex structures. Larger heiau were built by ali’i (chiefs), but the largest and most complex, the luakini heiau (sacrificial temple), could only be constructed and dedicated by an ali’i ‘ai moku. Luakini heiau were reserved for rituals involving human or animal sacrifice and were generally dedicated to the war god Ku. Rituals performed at a luakini heiau highlighted the ali’i ‘ai moku’s spiritual, economic, political, and social control over his lands and his authority over the life and death of his people. 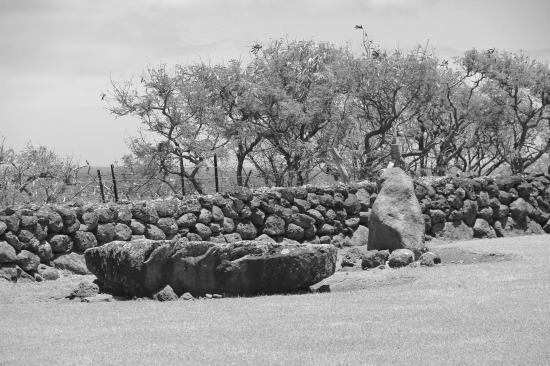 Outside the main heiau is a large boulder with worn-in indentations with another upturned stone nearby. Upon this stone victims were ritually stripped of their flesh and their bones were removed and used to make fish hooks and other implements.

Thousands of people were killed here ritually in furtherance of the kapu system of laws.

Even in modern times it was long held to be strictly kapu to visit this site. 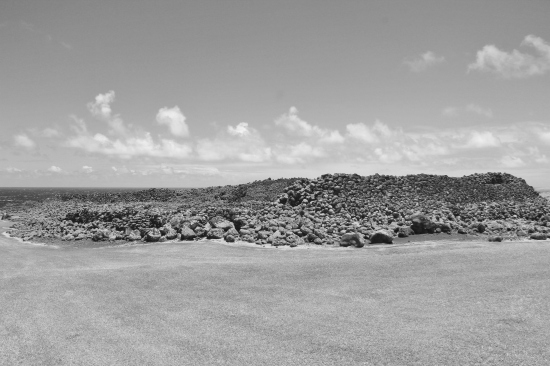 The current Kahuna Nui (High Priestess), Leimomi Moʻokini Lum, is the seventh high priestess of the Moʻokini bloodline serving the temple. Her family has cared for the temple since its beginning in a rare unbroken line of guardianship.

In 1978 Leimomi Moʻokini Lum lifted the kapu (taboo) forbidding anyone but ali’i and kahuna from entering Mo’okini Heiau. In doing this she made it safe for all persons to enter the Heiau

In 1994, she again rededicated the heiau, this time to the children of the world. Kahuna Nui Lum followed closely the wishes of her father Kahuna Nui Dewey O. Mo’okini who visualized this sacred site as one for the children of Hawai’i and the entire world. 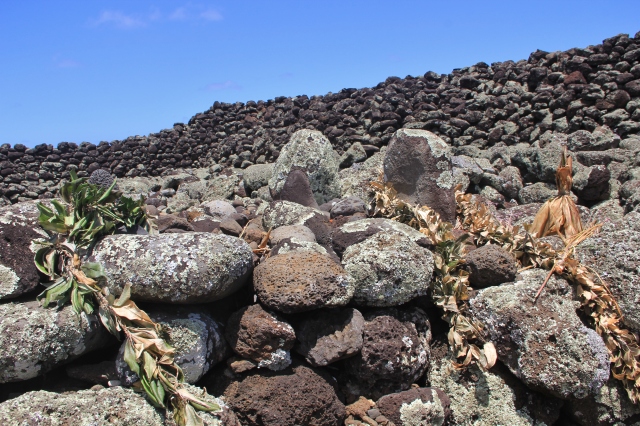 Visitors to the site often bring a flower or a lei to leave at the heiau as an offering of respect.

You can visit Mookini Luakini, but it isn’t easy to get to. It’s off the beaten path, seldom visited and rarely appears in travel brochures.

After a long drive on Kohala Mountain Road to Hawi, you find a side road that leads to Upolu Airport, which has only a single runway. Follow the dirt road that parallels the runway for two miles, on the lonely, barren, and rocky coast with the wild Maui Strait at your side. You’ll find yourself on a grassy hillside where the massive stone ruins sit solitary and brooding. The aura is both thrilling and eerie.

Among the oldest and most historically significant of Hawaiian sites, the story of Mo’okini Heiau has been passed on from generation to generation.

promoting environmental education, protecting all species and preserving the wild places with art, music and storytelling.
View all posts by earthstonestation →
This entry was posted in history, the hungry brain and tagged architecture, Culture, Hawaii, history, preservation. Bookmark the permalink.

3 Responses to The eerie aura of Mo’okini