Posted on May 3, 2015 by earthstonestation

Ancient Hawaiians lived sustainably and recognized that human civilization is an integral part of the natural world. If the human community is to survive, the natural world and nature must be preserved and perpetuated.

The Hawaiian Hale exemplifies the concept of sustainable design.

Pursuing everyday activities in the midst of warm sunshine and gentle breezes ancient Hawaiians lived their lives mostly outdoors. The benign climate did not require a shelter of thick walls and insulation for protection against rough weather.

Traditional hale were constructed of native woods lashed together with cordage. Materials for thatching were provided by the renewable resource of plant leaves and grasses.

The life of the land is preserved in righteousness. 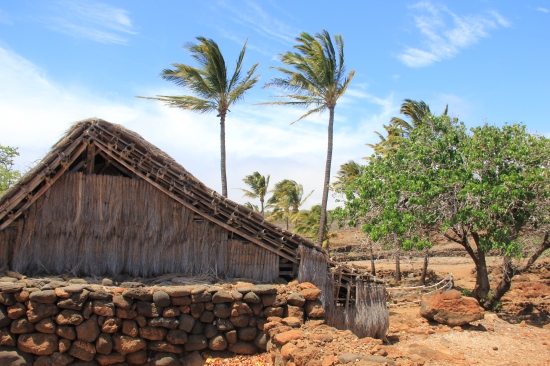 “The grass cabins are of a grayish color, are shaped much like our cottages, only with higher and steeper roofs usually, and are made of some kind of weed strongly bound together in bundles. The roofs are very thick, and so are the walls; the latter have square holes in them for windows. At a distance these cabins have a furry appearance, as if they might be made of bearskins. They are very cool and pleasant inside.”

—Mark Twain, recalling his 1866 visit to Hawai‘i in the book Roughing It 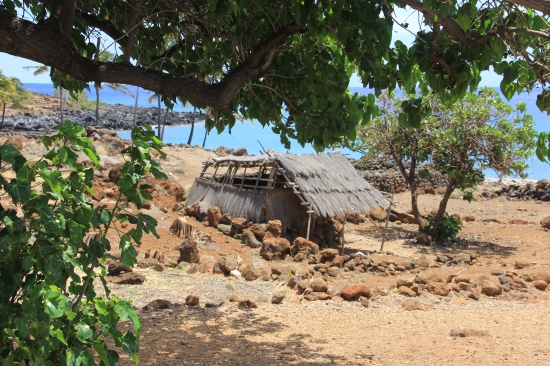 Thatch shelters were not all family homes. They served many purposes. A hale like this could have been used at a fish camp for a few days visit. A Hawaiian village consisted of many different types of hale. Different hale provided places for different kinds of work and rest. 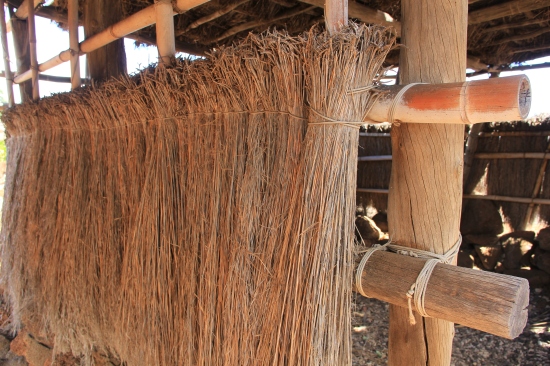 Pili grass was one of the most common materials used for thatching. Grass bundles were made by fastening with twisted fiber or vines and then tied to horizontal purlins. Large piles of Pili grass has to be collected to thatch an entire house. Huge piles to prepare and tie into bundles. Fortunately the task could be shared by the young, the females and the elderly of a family unit or village.

No task is too big when done together by all.

Overlapping of each course or row of thatch sheds any rainfall in the same manner as any shingle, tile or clay roof. Pili grass also has a sweet aromatic scent that makes for a pleasant home environment.

Grass is a natural sustainable resource and with a little help from the gathered family a new roof or walls can be replaced. 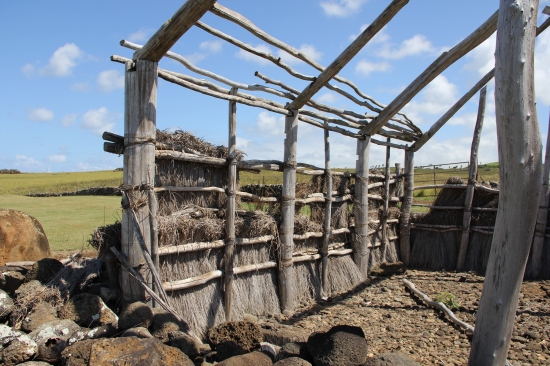 There are two basic house designs used in old Hawaii. A steep roof ‘A’ frame or an ‘A’ frame raised on short walls. Hawaiians had no nails or metal of any kind. Wooden poles were notched and fastened together with appropriate thicknesses of twisted string, twine or rope. Starting at the bottom, overlapping rows of thatch are tied to horizontal purlins, up the walls and over the roof. 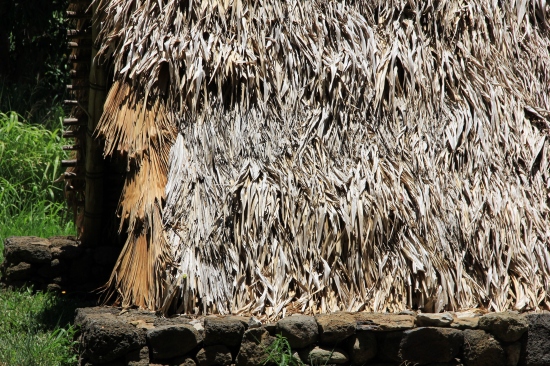 Pili grass with it’s pleasant odor was a preferred material for thatch. Palm, Pandanus, sugar cane and Ti leaf bundles were other common covering materials. Consider this, It takes about 40 Ti leaves to cover a square foot. 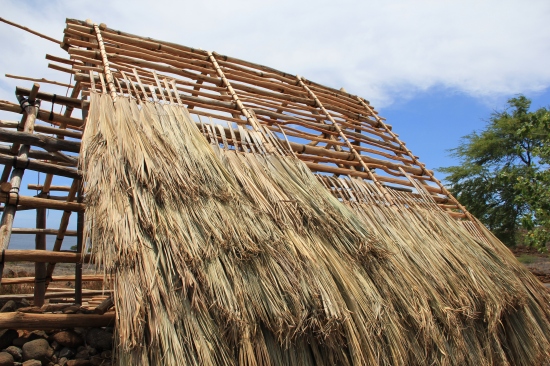 Palm branches with the lower leaves removed  have an added advantage when used in construction. The stiff stalks add rigidity to the framework and with the large mass of the palm the surface can be covered quickly and with depth.

Many ancient Hawaiian structures held cultural importance. The Halau, or house of instruction, was a place of instruction, where young native Hawaiians learned the art of the hula and other aspects of Hawaiian culture. In the Hale Pahu, or drum house, drums and other instruments needed for hula dances were stored. In the Hale Ulana, or weaving house, women created mats, baskets, fans, and other items from dried leaves woven delicately together. Near the water, the Hale Wa’a, or canoe house, held canoes. Closest to the shoreline, the Hale Lawai’a, or fishing house, provided space for fishermen to prepare their gear and nets.

All knowledge is not taught in one school.

Grass thatch will last for many years but being an organic material it will eventually decompose and have to be replaced.  Grass and leaves are naturally regenerative and a hale like this is a sustainable design.

Aina is what the Hawaiians called the land, it means “that which feeds.”

Decades after Western contact, grass hale continued to be built and used. In 1816, traditional grass hale were still prevalent, though adobe and coral block houses were also being built near Honolulu harbor. By 1837, pili grass and local woods were still the main materials, but buildings began to incorporate Western design elements such as windows, high ceilings and large portal entrances. New materials also began to be used by 1840. 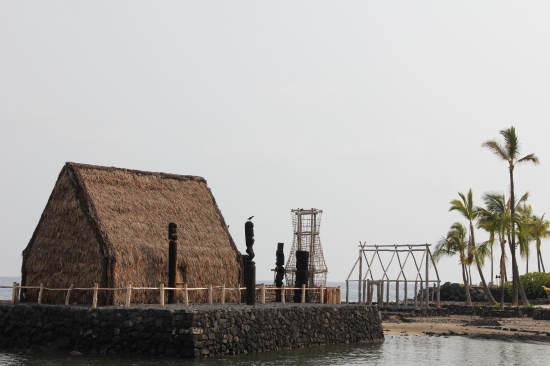 Ahu’ena Heiau is one of the most significant historical and cultural spots in Hawaii. King Kamehameha the Great lived, conducted matters of government and worshiped at this place from 1813 until his death in 1819. This well- restored site sits at the waters edge overlooking Kailua Bay on the Big Island.

Several tall ki’i akua (carved statues) adorn the area. A bird depicted on the tallest statue is the golden plover. This bird is said to have lead the ancient Polynesians to Hawaii.

House from which to watch the farm lands.

In ancient times Hale o Keawe served as a royal mausoleum, housing the remains of deified high chiefs. The powerful mana (divine power) associated with these remains  sanctified the grounds.

Separated from the royal grounds by a massive stone wall built around 1550 is ‘The Place of Refuge” or puʻuhonua. The pu`uhonua was a refuge for defeated warriors, noncombatants, women, children, and elderly in wartimes. It was also a safe haven for those who violated the sacred laws, or kapu. The lawbreaker trying to flee those trying to kill him, could run or swim across Honaunau Bay to reach the pu`uhonua, he or she could be prayed for by a kahuna, and freed to return safely to their home. 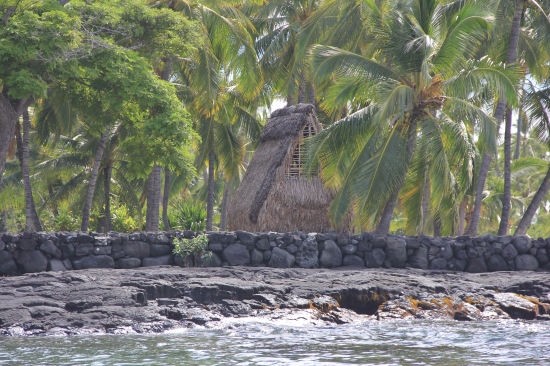 The grounds just outside the great wall that encloses the puʻuhonua were home to several generations of powerful chiefs.

Tradiitional village of Hawai’i hale listed in order of importance:

Heiau – temple to the gods. They were built on high-rising stone terraces and adorned with wood or stone carved idols. A source of great mana or divine power.

Hale Ali’i – The house of the chief. It was used as a residence for the high chief and meeting place for the lesser chiefs. It was always built on a raised stone foundation to represent high social standing. Kahili (feathered standards) were placed outside to signify royalty.

Hale Pahu – The house of the sacred hula instruments. It held the pahu drums. It was treated as a religions space, as the hula was a religious activity in honor of the goddess Laka.

Hale Papa’a – the house of royal storage. It was built to store royal implements, such as fabrics, prized nets and lines, clubs, spears and other weapons.

Hale Ulana – The house of the weaver. It was the house where craftswomen would gather each day to manufacture the village baskets, fans, mats, and other implements from dried pandanus leaves called lauhala.

Hale Mua – The men’s eating house. Women ate at their own separate eating house, known as the Hale Aina.

Hale Wa’a – The house of the canoe. It was built along the beaches as a shelter for fishing vessels. Additionally, Hawaiians used the hale wa’a to store koa or mahogany logs used to craft the canoes.

Hale Lawai’a – The house of fishing. It was built along the beaches as a shelter for the fishing nets and lines. Nets and lines were made by a tough rope fashioned from coconut husks. Fish hooks were made from human, pig or dog bone. Implements found in the hale lawai’a were some of the most prized possessions of the entire village.

Hale Noho – The living house. It was built as a sleeping and living quarters for the Hawaiian family unit. 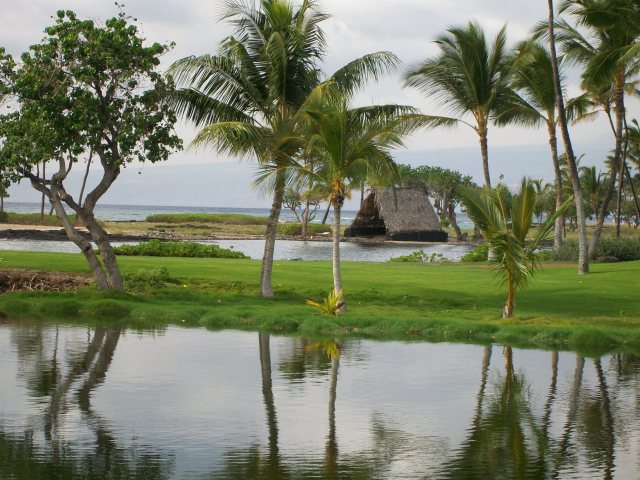 Today, more than ever, the concept of sustainable design is in the forefront. The style that represents Hawaiian culture is the hale.

“It is time for a revival of traditional Hawaiian architecture in our community” says master hale builder Palani Sinenci. Architecture defines a place and a culture. “Seeing the native architecture helps us to identify with our ancestors and our culture”. Sinenci believes bringing back the hale is a way to practice the culture.

For me it is a blessing to live and work in a place where the past is so alive and traditional culture is represented all around.