Posted on August 6, 2014 by earthstonestation

About ten miles from my home the Lower Farm is a herd of alpaca. Horses, cattle or even sheep may come to mind when thinking about livestock in New Mexico but in the Mora Valley a herd of alpaca thrives in the environment there.

Alpaca are social herd animals that have been domesticated for thousands of years in the Andean Altiplano, the high plateau areas of Argentina, Peru and  Bolivia. As there is no archeological evidence of  a wild alpaca, the origin of the species is believed to be the vicuña. Vicuña and llamas  are part of the camelid species, capable of interbreeding. During the postconquest period of South America intense hybridization played an important role in developing the alpaca that we know today.

An adult alpaca generally is between 81 and 99 cm in height at the withers and they usually weigh between 48 and 84 kg (106 and 185 lbs). Unlike their larger cousins the llama, alpacas are too small to be used as pack animals and are most valuable as fiber-bearing. Alpaca fleece is a soft, durable, and silky natural fiber that is water repellant, fire retardant and does not hold static electricity. While similar to sheep’s wool, it is warmer, not prickly and has no lanolin, which makes it hypoallergenic. Alpaca fiber is used for making knitted and woven items and a wide variety of textiles. 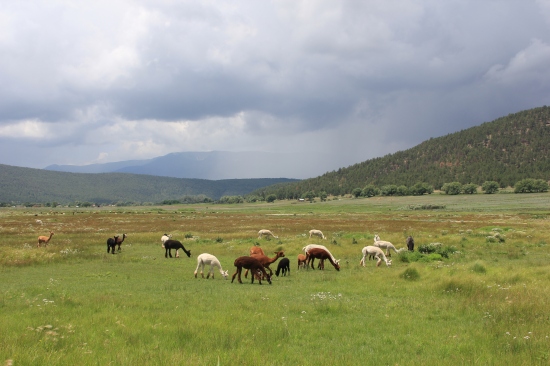 Most of the alpacas reared in South America are under the control of traditional pastoralists and breeding occurs primarily in poor farm communities. The alpaca is of extreme importance for the economy of South American herders. The Peruvian Ministry of Agriculture reports that Peru and Bolivia have 99% of the world alpaca population.

Alpacas require much less food than most animals of their size. They generally eat hay, grasses and tender young plants and it is possible to raise up to 10 alpacas per acre (dependent on the quality of pasture available). Alpacas need to eat 1–2% of body weight per day, so about two 60 lb (27 kg) bales of grass hay per month per animal is adequate when having to feed if forage is low.

Indigenous to the highest regions of the Andes, this harsh environment has created an extremely hardy animal, so only minimal housing and predator fencing are needed. There are no reports on specific alpaca predators in their native range. Breeders in areas outside the alpaca native range identify coyotes, wolves, large cats, and dogs as predators. Most predation will be on young, sick, or old animals, as alpacas are vigilant and will defend themselves with their hooves and spitting their foul stomach contents into the face of a predator.

Alpacas have a preference to use communal dung piles to deposit urine and feces. This behavior to keep their waste area away from their eating area tends to limit the spread of internal parasites.

Similar to ruminants, such as cattle and sheep, alpacas have only lower teeth at the front of their mouths; therefore, they do not pull grass up by the roots. Due to some of their physical characteristics such as padded soles on their feet and light weight, alpaca do not compact the soil or destroy the vegetation in their habitat. Moreover, they feed on the natural forage and grasses in the ecosystem. Altogether, these animals are ideal livestock for low impact grazing.

According to breeders, alpacas use most of their body parts for communication. They will strike poses, stances and postures ascribed to defending their territory, a sign of danger, a show of dominance or that of submission. 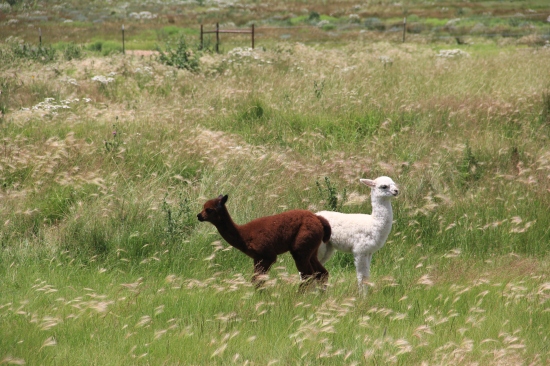 The longevity of alpaca  in the wild is 5 to 10 years, whereas in captivity it is approximately 20 years. Females reach sexual maturity at 12 to 15 months, whereas males reach it around 30 to 36 months.Gestation takes between 242 and 345 days. They only give birth in the morning before noon and the young stand 15 min after being born. Mothers watch their newborns closely but do not approach their young until they finally stand up, then mothers readily approach their young so that the newborns can get their first milk.

Crias is the term used to designate alpaca offspring up to 6 months of age. Alpacas are weaned at 6 to 8 months. 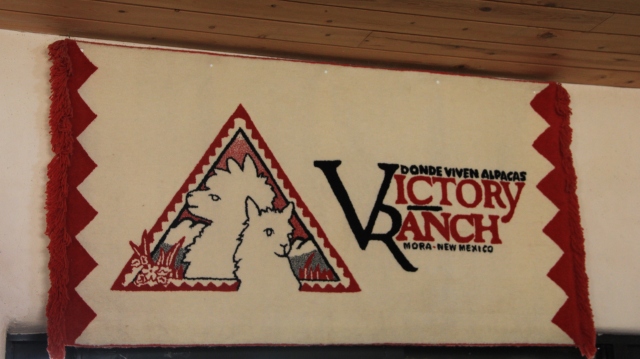 The 1,1000 acre Victory Ranch in Mora, NM has a herd of 300 alpaca. The family owned and operated ranch started with just eleven animals when they began in 1990.  The business has created an eco-friendly unique niche in the local economy. Besides the alpaca fleece which they shear and harvest, the ranch offers animals of all ages for sale and their successful breeding program has produced several outstanding champion studs. 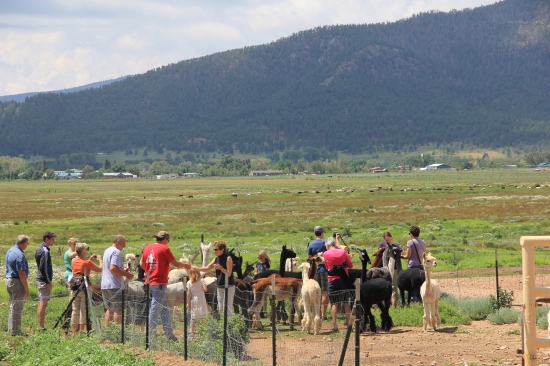 Victory Ranch is open to the public for tours from mid March through the end of December with daily hours of operation from 10 am to 4 pm.  Alpaca feedings happen three times a day.

If  you ever have the opportunity to experience a working alpaca ranch I recommend it. From Albuquerque, Santa Fe, Angel Fire or Taos it makes for an exciting and fun day trip. 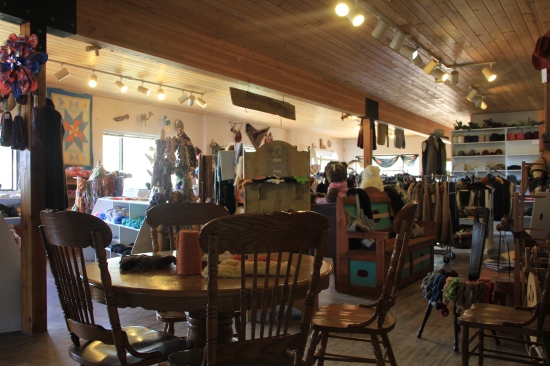 The ranch also has a 3,000 sq. ft. store with fashionable clothing and gifts. It features the largest selection of alpaca yarn in the United States. 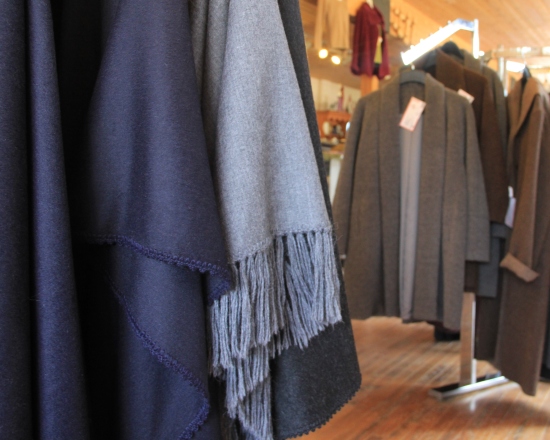 Alpaca fleece is a soft, durable, luxurious and silky natural fiber with many uses.

The preparing, carding, spinning, weaving and finishing process of alpaca is very similar to the process used for wool. 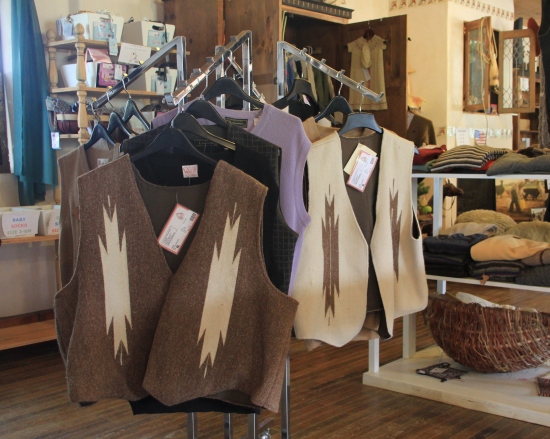 Alpaca fleece is made into various products, from very simple and inexpensive garments made by aboriginal communities to sophisticated, industrially made expensive products such as top designer men’s and women’s suits.

The day I spent with the alpacas was both educational and entertaining. I’d especially like to say mahalo to Brian and Wyatt for their hospitality.

To visit the Victory Ranch and Donde Viven Alpaca you will find them on route 518 just a few miles north of the town of Mora, New Mexico. Their web site is http://www.victoryranch.com or contact their email: alpacas@victoryranch.com 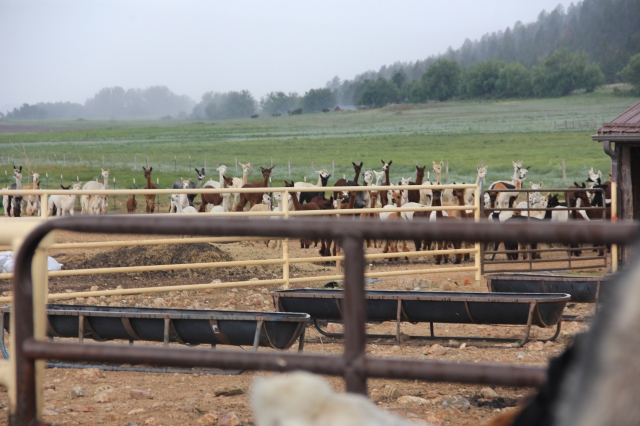 sources used for this article: Wikipedia and ADW the Animal Diversity Web from the University of Michigan.