Posted on April 17, 2014 by earthstonestation

Grounded in the local landscape and integral to the traditions and cultural identity of the people of northern New Mexico are their cemeteries. Campo Santo is the Spanish word for burial ground. During the New Mexico colonial period when Catholic churches were first built the deceased were buried in walled enclosures near the church. Later as space became limited cemeteries were built on the outskirts of the growing towns. The symbolism found at a Campo Santo in New Mexico testifies to the deep religious faith that has sustained the people here since the time of the early Spanish settlers. 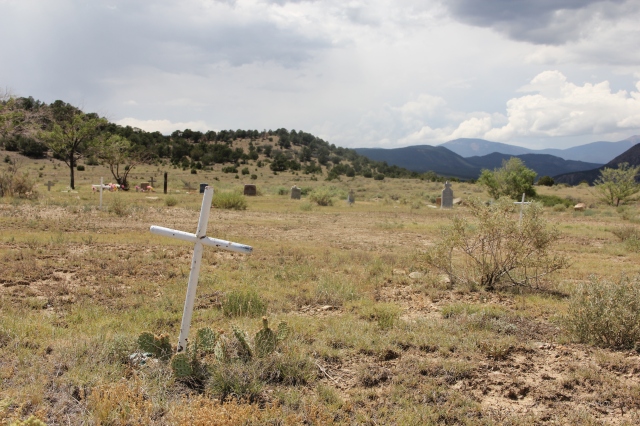 The last rights have been given, the prayers all said, there are no more words. Only memories remain. In a few decades they too will fade away.

Bright colors contrast the parched sun baked soil on the graves of the newly departed. It brings some joy to lighten the grief for those that morn, perhaps more than than it does for those that lie in darkness. Rather than bouquets of natural blooms, everlasting (plastic) flowers are the norm but these too will grow old and brittle, coated with dust and fade away in time.

Everyone knows that in time all things will pass, even the graveside mementos and plastic flowers. However; a core belief of the Christian faithful is that there is life after death and God’s love will never fade, it is eternal.

Jesus of the bleeding heart and the Virgin Mary watch over the deceased.

It is a common practice in northern New Mexico to build a small graveside shrine to house a Santo. 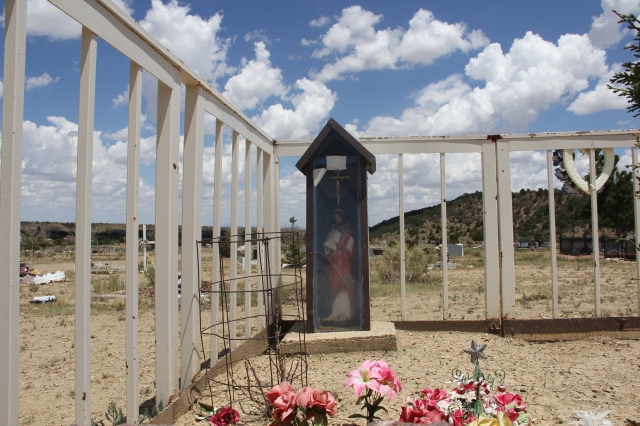 The plot of land that holds the grave is often enclosed with a fence of metal or wood and sometimes simply defined with a perimeter of a concrete curb. Here there are no well kept lawns of green, only the sparse native grass, chamisa and cactus.

In many cultures, people desire to create something that outlasts them, to leave a mark that says, “we were here”, or for those deceased “they were here”.

The enclosure of the site and much of the religious art or mementos is usually hand made.

In death as it was in life Our Lady of Guadalupe is never far from the side of Lizzie Sanchez.

The culture of northern New Mexico with it’s deep roots in Catholicism has faith that from their first steps to their last and on every dusty road along the way,  Jesus will be with them. 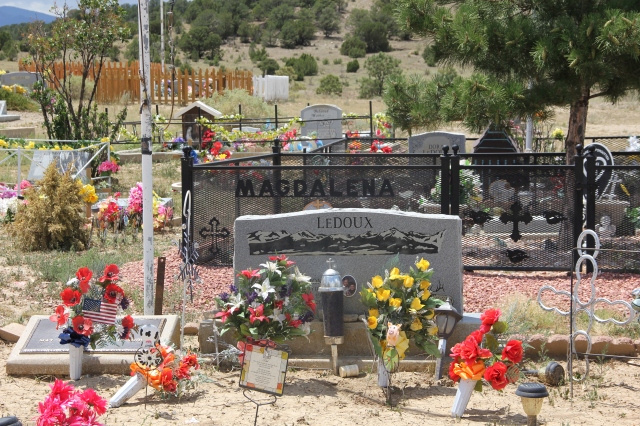 Grounded in local landscape and integral to cultural identity there is the symbolism of permanence to be found at the Campo Santo in Cimarron.

A side note on the name LeDoux. It is of French origin but in northern New Mexico it is pronounced La Dooks. In the early 1800s during the time of the mountain men a French trapper of this name would venture to Taos to participate in the annual rendezvous and to trade hides and meet up with other trappers for a trade fair. Eventually LeDoux would settle in the area and start a family. In the town of Taos there is a street bearing his name and the village where I have an old adobe home is called LeDoux. Here in the Campo Santo at Cimarron there are several grave stones bearing his name. Some day I’ll have to dig into the history of this old trapper and his progeny.

Adios and be in good health, Dohn

Photography from a journey along the Santa Fe Trail, 2012

promoting environmental education, protecting all species and preserving the wild places with art, music and storytelling.
View all posts by earthstonestation →
This entry was posted in earth, history, the hungry brain and tagged history, New Mexico, photography, Society. Bookmark the permalink.

4 Responses to The Campo Santo at Cimarron, New Mexico