The works of American artist Josh Sommers is somewhere along the boundaries of landscape photography, art, mathematics, and technology.  There’s a crispness to these photos, in that they appear to have been planned from the beginning instead of having an effect slapped on afterward

Josh has worked on a whole series of photographs that involve computerized sterographic projection. The result of the process are images that resemble Tiny Planets.

The stereographic projection, in geometry, is a particular mapping (function) that projects a sphere onto a plane. The projection is defined on the entire sphere, except at one point — the projection point. It is conformal, meaning that it preserves angles. It is neither isometric nor area-preserving: that is, it preserves neither distances nor the areas of figures.

Did you understand that Wikipedia definition? The diagram below may help clear up any confusion. 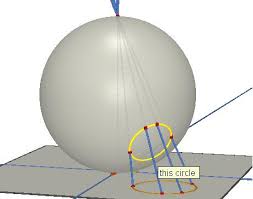 Still confused? Don’t worry it’s not important. It is the final product, the art that matters. Josh Sommers, as all artists, just asks that we take a moment to reflect on the world around us. In this case our Tiny Planet.

Is this a universe where you would like to live?

How about a playground planet ?

How about if there was a bridge to link us all together?

What would you think if there was a one church planet?

or as it was – an animal planet.

Please, check out Josh Sommers artwork (lots of cool stuff) over at his Flickr site, including this great stereographic animation.

promoting environmental education, protecting all species and preserving the wild places with art, music and storytelling.
View all posts by earthstonestation →
This entry was posted in Art, environment, the hungry brain and tagged Art, environment, photography. Bookmark the permalink.