Posted on April 7, 2013 by earthstonestation

In the First World War patriotism at home called for planting what were called Liberty Gardens. Beginning in WW I and again in WW II everyday urban citizens were encouraged by the government to grow their own food. Food production and supply had become a matter of national concern and Victory Gardens as they were called during  WW II were touted as a way to insure food security. Front yards, back yards, vacant lots and city parks were dug up and planted with vegetables. The war effort media promoted “Grow Your Own” through a wide range of magazines, art and posters.

“I hope every American who possibly can will grow a victory garden this year. We found out last year that even the small gardens helped.

The total harvest from victory gardens was tremendous. It made the difference between scarcity and abundance. The Department of Agriculture surveys show that 42 percent of the fresh vegetables consumed in 1943 came from victory gardens. This should clearly emphasize the far-reaching importance of the victory garden program.

Because of the greatly increased demands in 1944, we will need all the food we can grow. Food still remains a first essential to winning the war. Victory gardens are of direct benefit in helping relieve manpower.”

The graphic arts designs on nostalgic Victory Gardens posters stress patriotism as a motivation to cultivate public and private lands. Aside from the flag waving, the messages on these old posters can be applied to people’s apprehension about food security today. Planting and harvesting herbs and vegetables has numerous healthful benefits.

Womans magazines of the time, seed company pamphlets and a wealth of information from the U.S. Department of Agriculture promoted the health aspect of raising food in small plots of urban land.

Preserving and canning home grown foods was a hedge against an uncertain future. Committment and personal action that lead to self sufficiency was a victory. In 1943 twenty million Americans were digging for liberty and victory in over five million gardens. Forty two percent of the vegetables produced in the nation that year came from urban gardens. Victory Gardens were also planted in Canada, Australia and the U. K. with similar results.

One wonderful thing about gardening is that there is no age limit for participation. The educational opportunity for youth is unbounded and unlimited.

Children learned responsibility and took pride in contributing to their community by growing Liberty Gardens at school during WW I and during the Great Depression of the 1930s.

Utilizing the nations school system a large percentage of the population could be directly or indirectly communicated with. Public cooperation and youth involvement for civic projects was more easlily organized through initiatives like the U.S. School Garden Program.

Your Victory Garden Counts More Than Ever. The same slogan can be applied today due to concerns of current economic and environmental threats around the world. Food availability, cost and safety can be disrupted easily in today’s society. Having a small garden and harvesting, drying and preserving foods is once again seen as a valuable resource and bit of insurance in an unstable world.

Grow Your Own Be Sure. After WW II the U.S. Department of Agriculture abandoned the Victory Garden campaign and focused attention on large agri-business. Interest in home gardening fell off during the 50’s and 60’s and then had a small resurgence in the early 70’s with the “back to the land movement”. The overall number of gardens dropped again through the 1980’s and 90’s. Recently the trend is raising. The new Victory gardens are in response to the uncertainties of global warming, drought, high costs and food shortages. Liberty Gardens, as I like to call them are being planted by everyday folks who are concerned about food safety and want to eat more healthy. 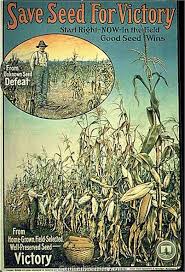 Save Seed For Variety. A handful of chemical agri-business companies dominate and control the world wide seed industry. Seed sold by these companies have been soaked in chemicals, are hybrids or genetically modified and legally patented. A chemical company with a monopoly on the world seed supply is not a good thing. Fortunately there is a growing source of “heirloom” type vegetable seeds available from traditional farmers. In a return to the past, people are relearning to save and respect seed stocks. Sow The Seeds of Liberty. Stop the tyranny of high prices and chemical laden produce. Take back control of your food by planting your own Liberty Garden. Every little bit can help. A window box, a few pots along the steps, a spot behind the old garage is all it takes. Dig in for victory.

“No unemployment insurance can be compared to an alliance between man and a plot of land”  Henry Ford.

“I hope every American who possibly can will grow a Victory Garden this year. We found out last year that even the small gardens helped.” Franklin D. Roosevelt